More Summer Reads....but they won't cool you down! 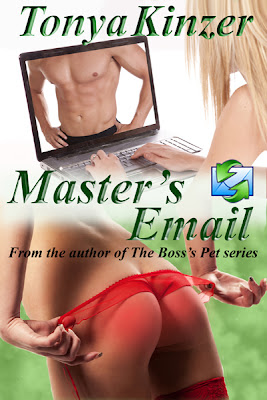 Because I love teasing you.....

The clock chimed six o’clock and Alex’s heart raced. As a gift to him, performing for Colt before several of his cameras made her happy today. She’d finish her last performance on time, as well as those throughout the day and smiled, glad that she’d done things for her Master without being requested. Now it was time to prepare herself for the massage room.
In the bathroom, naked before the mirror, her nipples protruded from the clamps behind them and she lightly touched each one with her finger, loving that those nerves were connected to so many other parts of her body, too. Pinching each one, Alex rolled the tips between her thumb and fingers to make her juices flow more than they already were.
A moan slipped past her parted lips.
Waiting for Colt to arrive would seem like an eternity; she hated having him gone so often. One last nipple tweak and she removed the clamps, and then combed out her long hair. When she sprayed one spritz of Euphoria on the back of her neck, some drifted lower and stung where the flogger marks were still welted.
Alex bit her lower lip...Colt wouldn’t be happy with her. She shook her head. Taking a deep breath, she turned and headed into their massage room...her favorite room in the house.
She lit candles and patchouli incense, and then breathed in the gentle aroma as it filled the room. Shadows flickered off the wall from the candle’s orange flame, igniting her inner fire and excitement sparked along every nerve ending. Her Master’s touch is what Alex craved right now and hoped he wouldn’t keep her waiting long. Sitting on the edge of a chair, she buckled both ankle cuffs, put on both wrist cuffs, and then fastened her collar.
The center of the table was elevated so that her hips would be, too, once her head and shoulders were resting on the table and head rest. Climbing onto the padded table, she lay naked, on her stomach, atop the towel-covered massage table as her Master had requested, with her face away from the doorway, wondering when he might arrive.
She stared at the monitor on the wall at eye level that Colt had installed there so Alex could watch replays of her performances. Some of them got her excited as she’d watch the replays.
Her fingers flexed and she wiggled her feet at the same time she stretched and her back pain snapped at her. The cold towels had helped and she’d do that again before bed. But now, excitement clenched her inner muscles, making her feel the large anal plug in her ass; thinking of her Master constantly kept her wet. Tightening her inner muscles, she could feel the plug deeper inside.
How much larger would he make her go?
He’d ordered her to always wear his plug so she would know whom she belonged to. She still hadn’t gotten used to the pleasure-pain completely, but each day came easier to tolerate. It was worth it, just knowing that the very thought of her tight ass filled with his plug made his cock hard all day and the best part was that she got to relieve him of that.
She'd already been on the table for a good ten minutes, her mind wandering from one erotic thought to another, contemplating the pleasure-pains she'd received at his hands in the past. Wondering what might be in store for her tonight, she seeped again.
He'd been mentioning some new training she needed and she thought back over their conversations. The new Dom had already stopped by...what more could he want of her? He loved teasing her about taking the full length of his cock up her ass and he knew it made her shiver in fear, even though she did love his finger there. But...his long, thick shaft...was much bigger than his fingers!
Master was quite stern in his commanding, but a very gentle lover. When he first ordered the wearing of his small butt plug, she tried to object but knew she had to do as he commanded or tolerate ten lashes of his flogger. It didn’t take many of those sessions for her to obey.  The bargain they’d made a long time ago, along with the contract she’d knowingly signed and agreed to, was not something she took lightly. So she wore his plug constantly to please her Master, knowing he always thought of where his plug was at.

The back door clicked shut and her heart thudded in her chest as she lay there in her dim, flickering world.
She swallowed.
Although she knew only Master had a key...this time the thought of a stranger getting in and finding her naked on the table scared the hell out of her, like the other day when Colt told her to be ready for the new Dom when he arrived.
That fear still left a knot in her stomach.
No…it had to be Master, not a burglar!
She listened for footsteps but heard nothing.
The monitor lit up!
The replay of her session with Master Buck began and shock heated her face. Colt could control the lens zoom and had closed in on her ass as the plug slowly plunged in and out...it was huge! She couldn’t take her eyes off the screen. Hearing herself moan and cry out made her juices flow even now. He’d made her feel pain and pleasure at the same time. The erotic scene sent need through her body. She craved her Master’s touch and wanted to feel him slide between her lips...at both ends.
Watching the flogger land made her cringe but was worse if she closed her eyes, reliving it each time she heard herself cry out. All too quickly, it now showed Master Buck standing before her...his full length hanging in front of her face. Again the lens zoomed in...the purple head stroking her tongue and she remembered the heat! Alex nearly gagged again just seeing it.
Colt must have loved watching this!
Then a warm hand moved over the cheek of her ass and air sucked into her lungs.
"Do NOT look at me, pet."
The sound of his stern familiar voice caressed her ear like silk.
“You pleased me well as I watched your performance...several times! I thought you needed the experience of another Dom. Upon watching, I realized another area of training you need is your throat, but we’ll work on that…perhaps a future visit or two from Master Buck again!”
Her throat immediately constricted.

Did that little bit of smut get you going enough to want more? Then click here to find the link that holds YOUR e-format and grab your own copy. Readers are wanting more of Alexis, Colt and Master Buck so please know that there will be more books to follow of Master's Email.
In the meantime, these characters will be making an appearance in book 5 of The Boss's Pet series, coming in September, so I hope you'll be ready for that. A sneak peek at the cover? 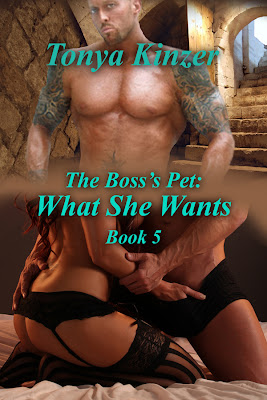 Muah! Thanks for stopping in!
Posted by Tonya Kinzer at 11:46 AM