This is a short story I found in my files that I'd written years ago and with a bit of editing, it's shaping up to be an enticing story for those who like to watch! I hope you enjoy it - it will release at .99 just for you! Stay tuned so you know when it releases. The best way for that is to be signed up for my newsletter, which also puts you in the monthly drawing of my subscribers.

Another way to win is by following my blog. To keep you coming back, I have authors signing up for future interviews now that my time at the office isn't required 24/7!

Blurb:  She knows each morning she must check her email first thing. Her Master sends instructions of what he wants her to do everyday so he can view it on his webcam at the office. The cameras he's hidden around the house capture her performances no matter what room she's in. If her performances displease Master, punishment will follow, as she's found out.

Does she disobey on purpose, hoping to be spanked? Master has yet to do that so she continues to test him. She refuses to ask for a spanking but her inner desires are getting so strong she may be forced to ask if she can't push him to do that. What will she do today to provoke his punishment?

Welcome to the Release Party

I know the music is loud and it's dark in here, but join in, grab your glass of champagne from one of our sexy waiters and have a look around. We're so glad you stopped in. You'll also find artist booths who are doing glow-in-the-dark body paints so be sure to stop at one and pick out a few sexy designs to show off.

Now - go find Casey! She's mingling among all the guests and streamers. I'm sure you'll run into many of your friends as you roam around. Don't be afraid to dance a little and let yourself go! Grab one of the waiters with an empty tray but watch out for the balloons floating around on the floor. We're glad you joined us for the fun and let's begin the celebration of Casey's new book.

I've posted the excerpt below for your reading pleasure! Psst! Come closer - there are extra towels in the reading room when you're ready to read the excerpt! Don't forget to leave a comment to be in the drawing! 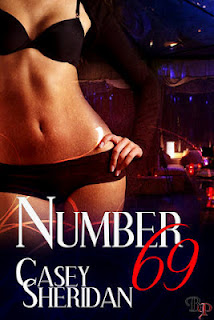 Blurb:
A matchmaking party was not Melodie's idea of fun, and wearing vibrating panties was just plain weird. Or was it?

Should she go to the party? After all, she just might meet Mr. Right. And if he doesn't show, she has the vibrating panties to keep things interesting.

He chuckled softly, brought her hand up to his sensuous lips, and placed a kiss on the back of her hand. The brief contact left a delightful tingle on her skin.
His eyes shone with a flirtatious sparkle. “Sixty-nine? That’s my favorite number.”
Her face warmed with a soft blush. “Actually, my name is Melodie. Melodie Kane.”
Elliott closed his eyes. “Melodie. Melodie Kane.” It was as if he was trying it out on his tongue, and she had to admit, she loved the way he said it. He made her name sound erotic and naughty, a playful kind of naughty that made her nipples tighten.
When he opened his eyes, he gave her another bright smile. “Such a beautiful name. It’s a pleasure to meet you, Melodie. I’m afraid from now on I’ll forever associate you with the number sixty-nine, which makes that number a particularly sweet position.”
She couldn’t help but laugh aloud. “You have a mischievous side, Mr. Stevens.”
“Sorry about that. I get a bit corny when I’m nervous,” he said as he ran his hand through his hair.
He’s embarrassed too?
“I don’t think you’re being corny at all, but I do understand. This is my first time attending something like this. I’m so nervous I’m surprised I haven’t tripped over my own feet.”
A wave of relief washed over his handsome features. “Me too. Actually, a friend of mine signed me up. I wasn’t going to come.” He looked into her eyes before saying, “But now I’m glad I did.”
“Oh,” was all she could say. She never had anyone tell her something so sweet before. He was glad he came, because he’d met her. What was she supposed to say to that? Thank you? How sweet? Take off your clothes? What?
Her silence must have made Elliott more uneasy because he ran his hand through his hair again. That’s when Melodie noticed how large and strong they were. He had to be a musician or artist with hands like that. A massage therapist. That’s it! She could imagine the pleasure those long fingers would produce as they made their way over her body. She smiled slightly at the thought of replacing the vibrator. She liked the idea of him toying with her clit, and her panties were soaked as evidence of that fact.
Concentrate, Melodie! You’re letting your mind wander. Granted, it’s going off into delicious territory, but pay attention to the here and now.
Honesty was the best policy, she decided. She smiled and ran a finger around one of the buttons of his suit coat. “Thank you, Elliott. That’s very sweet of you to say.”
The effect was immediate. His shoulders straightened, and his chest puffed out. His eyes twinkled as they glanced again at her discarded champagne flute. “Can I get you another drink?”
He took up her glass, turned, and headed for the bar. Melodie watched him walk. She believed a woman could tell a lot about a man by the way his body moved when he walked, and what she saw was very, very good.
Head up and back straight said he had confidence and strength. His movements were fluid, powerful, and yet he had a masculine grace. He had a certain swagger that told her there was an excellent chance he was good in bed. If things continued to go well, maybe someday she’d find out for herself.
When Elliott reached the bar, he leaned over the counter slightly, and spoke to one of the bartenders, then looked back at her, giving her a wink.
She smiled in return, and the little bullet in her panties went from low to medium. She took a deep breath and enjoyed the wet pleasure her pussy received as she continued to gaze at Elliott. An image of him between her thighs came to mind—her legs thrown over his shoulders as his mouth gave her aching pussy the tongue-lashing it sorely needed.

Number 69 is available as an eBook from:

You can find her on the Web at:

We get back two-fold when we help others!

Contest:  One lucky commenter will win a PDF copy of Number 69 so be sure to leave a comment and include your email addy so Casey can reach the winner!

Cover of the Western - still tentative

I say the cover is still tentative because I'm not happy with the font or titles so those may change but the rest of the will stay pretty much the same. I'll be starting the book at the end of the month and can't wait to get to work! The Boss is keeping me pretty busy thru to month's end but after that....look out broncos, we have characters to round up, a setting to get into, along with lots of hot sexy scenes!

Stay tuned for updates as they happen as well as the progress of the book! Thank you so much for stopping in. Please know that I don't take your visits for granted when I know there are so many blogs and web sites to visit, so thank you! Are you signed up for my newsletter? That automatically enters you into my monthly drawings. Another drawing is done from those who follow my blog. Every month I give away gift cards to two lucky winners. Why miss out? Sign up is on the left!

I'm over at Erotica For All! 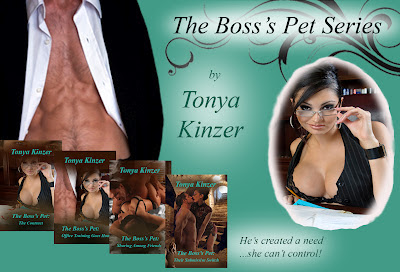 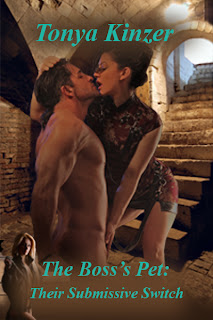 Book 4 in the series!
Amazon