It's time for another segment of Saturday AfterDark Moments, where authors write a saucy snippet
anywhere between 100 - 500 words, with your choice of a pic.

Here's what I have in store for you. 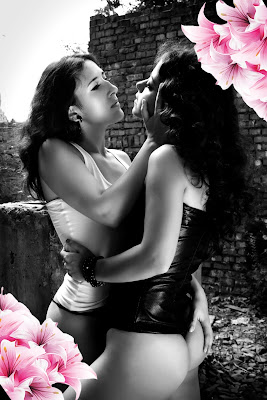 “Cut! Great job ladies! The viewers are going to love these photos. Are you up for posing in a few more for them?”
The thought of going inside, back to the bed, lying next to…and on top of…each other and Sandy didn’t think her damp thong would absorb any more. But to get the chance to continue caressing the gorgeous woman with her made the butterflies in her stomach flutter. She met Kiera’s blue eyes; her pupils were so large. She’d pulled in her lower lip which tugged at Sandy’s sensuous side; she wanted to lean over and suck in her lower lip with a deep kiss. Kiera’s breasts spilled over the top of the demi bra she wore and her thong covered a small patch of hair. To be so close to her all day, shooting outside, stroking each other in their skimpy lingerie…made Sandy smile at Kiera. “I’m game if you are…”
The sexier they were, the better the clients liked the photos. Praying that Kiera would say yes, she gently cupped her face and kissed Kiera, blaming it on the drinks they had before Daniel took their pictures. To her surprise, Kiera responded by touching her ass as they stood outside among the ruins.
Kiera moaned as she let out a breath and glanced at Daniel, their photographer. “What can a few more pictures hurt? I know the viewers love them.”
Holding hands, Sandy led Kiera inside to the bedroom they used for photo shoots.
Daniel dimmed the lights a bit. “Great! So….let’s spice it up a bit. We’ve never done this type of shoot for this client but let’s see what they think. One of you lay on top of the other, between her legs, look at each other as though you know what the other wants and hook a finger beneath a bra strap and slide it over the shoulder down the arm…maybe eventually exposing a breast.”
When Kiera lay back against the pillows and opened her thighs, Sandy wasted no time sliding up her body. Craving her warm skin, wanting to swirl her tongue over a dusty pert nipple, Sandy knew that would have to wait. Carefully she slipped a nail under the black bra strap, tugged it down and met Kiera’s gaze.
“Come on…take me, slut!”
She needed no further coaxing. Leaning over, Sandy slowly kissed the rise of a breast and tasted Kiera’s warm skin, imagining how it could be later. Kiera couldn’t wait until they were done, hoping that Daniel might leave them alone after the shoot finished. She had no interest in what he could do for them…or with them. Only a woman knew exactly where to touch their partner, how light to stroke the skin to tantalize the senses and how deep their fingers needed to go to touch the right spot.
Kiera had excellent hands, especially when they were covered in massage oil working the knots from Sandy’s shoulders. Could she be so lucky to find that Kiera might be interested in a night alone? Sandy wished for more but at least it’d be a start, to make her hunger for more when she got home alone in her bed.


Head back to
The AfterDarkWorld
for more stories