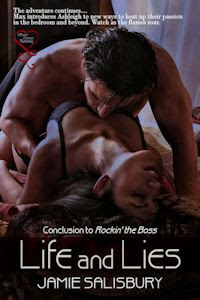 
The world is his oyster and Max Frazier knows that each and every pearl is his for the taking.  At the top, a theater bearing his name in Las Vegas, performances sold out months in advance and record sales through the roof. Things couldn't get any better, could they?

Ashleigh Thomas, the fiery, no nonsense businesswoman who orchestrated this success, the only woman he's truly ever wanted is his bed and life. But first he and Ashleigh have a mission to do, one he never wanted her involved in.


Alive and quite well, Ashleigh's thought to be dead husband Richard lurks in the background, teasing and taunting. He deals in the underbelly of life - the sex trade business. Max and Ashleigh infiltrate his world of sex clubs and more with one objective in mind…to put an end to Richard's evilness and bring him to justice.


Life has a funny way of dealing the cards. One day you're in bliss with the woman and family you love and longed for, the next it almost disappears. Forever, in the blink of an eye. . .but for the sheer determination of one agent who secretly blames himself for pushing the couple too deep calls in every favor owed him.


Max lay on his back, his muscular forearm now over his eyes while he listened to my rant. He’d known all along that my reaction would be exactly what he was hearing. I was also sure it was his job to convince me otherwise.


“Max, are you listening to me?” I pushed his arm away from his face. “There is no way I’m going to be part of some of the kinky crap you’re suggesting.”


“Well love, if you refuse the agency will be forced to place an active, experienced female agent with me.” I could feel his glare as he watched my reaction closely.


“So what you’re telling me is…if I don’t learn this lifestyle and go undercover with you where we’ll partake in this crap, you’ll go undercover anyway. Only you’ll go with a female agent who is already trained in this stuff. Did I leave anything out?” I sat abruptly upright on the bed and swung my legs over the side. I was pissed. Angry over the entire situation.


“No, you didn’t leave anything out, and yes that’s exactly what’s going to happen if you decide you’d rather not participate.”


I nervously paced the bedroom. My head was spinning and had a good idea what may come next.


“Tell me something Max. You obviously trained for this during the time you were away. I can’t imagine you having to re-learn how to handle weapons for six weeks. So you want to tell me about this part of your training or should I just leave it up to my imagination?”


“Ashleigh, you don’t know anything about this lifestyle so don’t try and imagine what is entailed. And yes, I trained with an experienced female as well as an experienced Dom.”


I felt sure he neglected to mention the fact that he had dabbled in the lifestyle prior to meeting me. I had done my research and it had been long before we ever met. It had evidently been a way for him to decompress after his missions with the SAS.


In the two short years since Jamie Salisbury began publishing her Romance stories, she has seen her historical-romance westerns soar to #1 on Amazon, has been nominated for a 2012 RONE award for her novella Tudor Rubato making the finals, and has expanded her audience to include several now published by Secret Cravings Publishing.


Currently Jamie lives in the American south. When she's not writing or plotting out her next story, she can be found with her camera, traveling or just chillin' reading a good book.