Christopher S. Dixon stops by with
an excerpt from his new book
The Making of Melissa 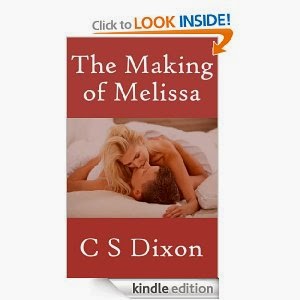 “Can you talk?”
“Not for long, he’s in the shower, what are you doing ringing now, do you know what time it is?” Marcus ignored Melissa’s question.
“Are you in bed?

“Where else would I be at 3am in the morning!” Melissa listened as Marcus described in graphic detail what he’d like to do with her. She moved a hand down her body and started stroking slowly between her legs. She was aware that he was masturbating also, his breath getting heavier as he imagined her naked in her bed.
“When are you free, we need to talk!” Marcus’s rich, velvety voice, a gorgeous combination of Barry White and Morgan Freeman was enough to start Melissa’s juices flowing and they both knew it. “I’ll have to hang up, he’s coming back!”
“Call me!” Marcus urged then the line went dead. It wasn’t the first time Marcus had rung at such an ungodly hour, she knew he was a workaholic like herself, but she had to tell him of the risk of phoning at night when Alec was back. What did he want to talk about? They had only met for a couple of coffees with Melissa always anxious they were not discovered. Alec returned clad only in a pair of shorts. “How was the shift?” She managed finally as he slipped into the bed next to her. Alec gave a double take. “Why do you want to know?
“Just trying to make conversation that’s all.” Alec broke wind, the stench flooding the bed. Melissa turned her head away in disgust and looked again at the clock, 3.20am. It was going to be a long night.