BIRD OF PREY, #1 This was supposed to be an easy case… Sémya Slotin had spent the last three years living in London with her best friend Polliannah Koch staying away from solving cases. After Hawaii, she was taking a break from puzzles, cases and mysteries that could potentially get her killed. Instead, she had been doing her second and third favorite things, drinking and selling expensive vintage wines and having earth-shattering sex with the mysterious, sexy, beautiful but ever so secretive Josh Heinz. Life in London was good….until her funds ran out. Too much wine drinking, not enough wine selling!
When fashion designer and adoptive mother, Annika Slotin, summoned her back to Paris to hire her for what Sémya considered being the easiest case of her amateur sleuth career, all she could think of and see was money signs and a well-deserved Cuban holiday once it was solved. What Sémya didn’t see was her stumbling on the fresh corpse of supermodel Johanna Cartier. She didn’t think that male model turned fashion designer Julian Marais-Caldwin, who also happened to be Sémya’s ex, would be suspected of brutally murdering her. Johanna was his girlfriend, his muse and he loved her. Sémya didn’t see the dead bodies piling up or the conspiracy theories. Sémya was a little rusty. But then again, it was supposed to be an easy case and she was going to solve it. One vintage wine at a time… Sémya Slotin was officially back in business! 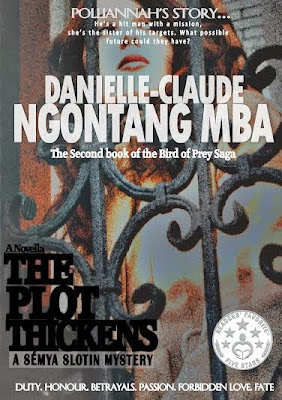 THE PLOT THICKENS, #2 What happened while Semya Slotin and Josh Heinz were busy solving Johanna Cartier's murder in Bird Of Prey? Polliannah's story... When Polliannah Koch Guryev meets John Allen, she thinks that she's finally found her Prince Charming a tall, blond and handsome banker. What could go wrong? John Allen has a job to do and getting closer to the beautiful Miss Koch Guryev is supposed to be a means to an end. But then they fall in love. He's a hit man on a mission, she's the sister of his targets. What possible future could they have? Now he and his Russian Princess have to leave London for their safety.But it may already be too late for them..

POLLIANNAH GOT MARRIED!, #3 The truth this time, and nothing but the truth… Polliannah Koch Guryev is in trouble and her boyfriend is dead. It's not the first time amateur sleuth Sémya Slotin finds herself on the first plane to rescue her best friend, but nothing's prepared her for what she finds in Toronto. Polliannah is a widow and her late husband John Allen was a hit man for the powerful Dovos family. What did they want from her? Why is this happening? One thing they do know: their carefree life back in London is officially over. Sémya’s long-time boyfriend Josh Heinz knows more than he lets on, but as usual he’s not telling her anything. In fact, everyone knows more, but nobody’s talking. But that never stops Sémya Slotin, Detective Extraordinaire, from finding out the truth beneath the lies… But at what cost? Old conspiracies and secrets resurface that put them all in peril. Sémya’s worst fears about her relationship with Josh and his past are confirmed, and the rift between them may never heal. Sémya and Polliannah’s world is falling apart. Will they be able to come out of this stronger? Oh, and did I mention that Polliannah got married?

VINCENT MALLORY EDGERTON, #4 The pursuit of peace is not always pacific. Vincent Mallory Edgerton had always been an efficient FREGG operative. It was his family legacy and his pride. He had always loved his job, even when he had to leave everything behind for his safety and become Josh Heinz. Every love story has a beginning. Sémya Slotin had been coasting through life solving one mystery after another. While in Hawaii, her young protégée disappeared. When Sémya met Josh Heinz, her mind kept telling her to stay away from the handsome stranger with the hypnotic light brown eyes but she found herself inexplicably drawn to him. He awakened something in her and she was unable to resist him. It never happened to her before. Who was that man?
In Hawaii, Vincent had to work covertly with the sexy bold sleuth. Sémya’s beauty and intellect completely enthralled him, but his passion and growing love for her also changed him. There was nothing he wouldn’t do to finally win her trust and keep her safe, causing him to unleash events that would shape the rest of their lives. From the moment their gazes locked, Sémya and Vincent sealed their fate.
Note: This book is part of the series and is not a standalone. You might be able to enjoy without reading Bird of Prey and The Plot Thickens first BUT I really advise to read Polliannah Got Married! first.

I’m over 30. I was born in Quebec City, Canada. I grew up in France and in Gabon. I speak English & French fluently. Pizza is my favorite dish. Black Forest Cake is my favorite dessert. I met Michael Jackson when I was eleven. I loathe vodka but love gin, wine and tequila. I'm obsessed with Robbie Williams and Michael Fassbender. I call Toronto my home. I love reading. I love dancing. I love watching exciting TV shows. I love my life... most days. I'm a major goof. I can't stand intolerance. I'm curious, cheeky and oh so opinionated!
Website • Blog • Twitter • Facebook • Goodreads