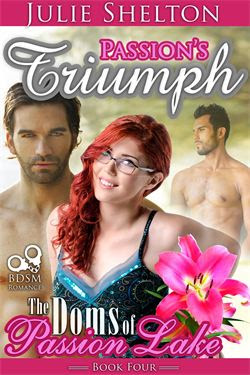 Julie Shelton
Erotic Romance
ADULT EXCERPT:
Alex climbed into his truck, but he didn’t drive off. He was too busy mentally reciting the FBI’s Manual of Administrative and Operational Procedures in an effort to deflate his cock enough to ease the stranglehold his jeans had around it. Holy shit! That woman is so fucking hot! The moment he’d laid eyes on her, his response to her had been instantaneous. The electrical current zapping between them had ripped the breath from his lungs. His heartbeat had gone from zero to sixty in one second flat and had started beating so hard he’d thought he was having a heart attack. He’d never reacted like that to any woman. Ever. And he’d had more than his fair share of those. But this one was different. He closed his eyes, squeezing his face tight. Lily Rose. God, what a beautiful name! Lily Rose. She was different, all right. She called to a part of him no woman had ever touched before. A part of his soul that had been waiting, biding its time, for just such a woman as Lily Rose Prescott.

And she was not immune to him either. The Dom in him had recognized the submissive signals she was giving off—her shyness, her diffidence, the constant blushing of that pale, translucent skin, her inability to hold his gaze. She had been aroused. He had smelled her essence, especially within the close confines of the elevator and his truck. If he’d swiped his finger through her slit, it would have come out wet and slick with her juice. Just the thought made him moan as his cock hardened once again, making him wince in pain.
Christ! I can’t go back to work like this! I’ll never hear the end of it. Suddenly putting his truck in gear, he checked both ways, made a u-turn and pulled into his driveway, heading back toward the garage. Fortunately his property was shielded from the neighbors’ view by a hedge, a cluster of crepe myrtle trees, and a gigantic live oak tree. Feeling desperate, awkward, and not a little stupid, he shoved his seat back, lifted his hips and unzipped his jeans, freeing his rock-hard erection. The skin was a mottled purple, and blistering hot to the touch. Wrapping his hand around the base, he began moving it up and down in hard, rapid strokes. As primed as he was, it didn’t take long before his eyes were closing, his body was tensing, and he was coming, great white globs of cum spurting all over his hand. Hissing his breath through his teeth, he continued to stroke himself and massage the head of his dick with his thumb, coaxing every last drop out of him. When he finally released himself, he realized he was shaking. And his dick was still semi-hard. As orgasms went, that one had been singularly unsatisfactory, leaving him feeling restless and scratchy, as if millions of insects were crawling just under his skin.
Grimly, he rummaged through the glove box, looking for a rag to wipe the stickiness off his hand, but the only thing he found was a coffee-stained napkin. Feeling more than a bit sheepish, he tucked himself back inside his jeans, moved the seat back up, and backed out of the driveway, his mind still reeling with what had just happened. He had just jacked off! Sitting in his driveway! Jesus, I haven’t done that since I was sixteen! As he turned to head back to the station, he realized that the truck still reeked of cum, so he quickly lowered the windows, hoping the breeze would dispel any lingering aroma. You’re in deep shit, McKay. Deeeep shit.
At the very last second, he jerked the wheel hard to the right and pulled into the clinic’s parking lot. Exiting the car, he entered through the back door. He had to tell Luc about this woman. Because if she was who he thought she was, Luc needed to be on board, too. The decision to take her as their sub and train her would have to be made by both of them. Alex walked past several open doors into empty examining rooms and headed straight for his brother’s office. Luc was sitting behind his desk, gazing intently at his computer screen, writing something on a pad on the desk top in front of him.
“I’ve found her,” Alex said quietly. “She is one of the most beautiful women I’ve ever met. And sweet? Fuck, is she ever sweet!” Now that he was describing her, his words tumbled all over each other in their effort to be heard. “And so fucking gorgeous! Red hair, perfect, pale skin, with just a light dusting of freckles. Green eyes. Ripe, delicious breasts, a body to die for, her ass is—”
“Whoa, whoa, whoa!” Lucas held up his hand. “Slow down. What the fuck are you talking about? Who are you talking about?”
“Lily Rose Prescott. Our new submissive.”
“What?” Luc’s voice rose three octaves. “You just met her and you’ve already talked her into being our submissive?”
Alex shrugged. “Well, not exactly,” he had to admit. “She doesn’t know it yet—”

Be on the lookout for Book Five
sometime before Christmas.


WHERE TO FIND ME
Website
Posted by Tonya Kinzer at 6:44 PM