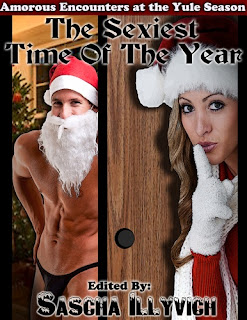 Readers, thank you for stopping in again today to see what these to are up to! They're both busy little hotties bringing you just what you wanted...more hot sex! Grab your drinks, kiss the bartender and gather 'round!

LR: On behalf of the other two authors featured in the anthology (Clarice Clique-Winter and Elizabeth J. Kolodziej-Demon Protection Plan) We would like to say thank you to Sascha Illyvich for helping us all make this anthology for what it is today. Happy Holidays!

Tonya: Thanks for stopping by and spending some time with us. I hear The Ark Hotel: Before the Dawn released November 22nd. Can you tell us about it?

LR:  An emotionally wounded woman finds an unexpected Prince Charming in a small town in Washington. When you’re ready to give up on love, love finds you, and in the damndest places.

With the Mayan’s predicted doomsday a year away, inspires many to take a spin on the Wheel of Pleasure at the risqué Ark Hotel.
Running north from an abusive relationship, Angie Perkins, never suspected her life would change by a chance encounter. Repulsed, she despises The Ark Hotel.
Noah Hawthorne, part owner and CEO of The Ark Hotel, can’t know that fate would serve up his true love in a small town diner.
With Christmas around the corner, can these two give of their hearts, finding their way past their pasts to each other as the clock ticks down on the world’s final moments?

Tonya:  Of course we have to know how you got started writing. So, what prompted you to pick up the pen?

Jp: I have always had a creative urge. I wrote my first short story when I was in the first grade. I am sure my mom still has it somewhere in her trunk of keep sakes. I wrote poetry, song lyrics and had great ideas, but never finished anything until I met Lani. She helped me to finish what was started.

LR: I never thought about writing as a career until 2005. I took some creative writing classes and started some work, until someone ripped me a new one with criticism. I laid my pen down and didn’t pick it back up until 2009. I’ve come a long way since then. I found that critics are everywhere. Some will try to make you better, some not. Learn from those who want to help you be better.

Tonya:  If you had to pick through your gems of works, which would you call your favorite(s) and why?

Jp: (Bouncing on the seat, raising her hand like a maniac) Ooooh, can I answer this one? “Rising Currents: Louisiana Moon….” It’s not even mine and it’s my favorite!

LR: I have to agree with JP here. Rising Currents: Louisiana Moon is by far my best work. I can’t wait until it’s published!

Tonya:  *writing down the title so I can watch for it* Back to The Ark Hotel: Before the Dawn, who is your favorite character?

LR: Lizzy. She is a straight talking, pulls no punches kind of lady. I love her!

Jp: Sadly, I identify with Angie. I haven’t always been happily married.

Tonya: I always dream up and envision my characters when I write. Who would you choose to represent your characters in The Ark Hotel: Before the Dawn?

LR: Not in looks, I can see Kathy Bates as Lizzy. As far as Angie and Noah go, I’d say they are people of their own.

Jp: I see Angie as a Kate Hudson Or Piper Perabo, the girl from Covert Affairs and Coyote Ugly. I see Noah as Bradley Cooper. (He’s hot!) As for Lizzy, I see her as Rosanne Barr.

Tonya: Where can your readers find you?

Jp: Our sites are listed below. Please stop in to visit!

Tonya: Great! Readers, make a note of those! Where can people buy the anthology your story The Ark Hotel: Before the Dawn is featured in?

LR:  here are the web addys…

JP: Thank you so much, Tonya, for allowing us to blog today. ((hugs)) We will be back on Friday. You are more than welcome to leave comments when you get the chance to stop by. Remember to visit Lani’s blog to enter the contest under the blog The Sexiest Time of the Year. But before you run off read this excerpt from The Ark Hotel: Before the Dawn

Hours later, exhausted but content, Angie hopped in the truck with Noah. "You're something else."
He was back in his jeans and sweater, looking sexier than ever. Still, she couldn't forget the fake white beard and spectacles he'd worn that somehow failed to detract from just how sexy he was.
"How about a kiss for Santa?" he winked.
Angie smiled. "Will I get on the naughty or nice list?"
Noah chuckled. "Depends on the kiss I guess."
Angie scooted over to the middle of the cab, eager for a kiss from Noah. His lips were soft against hers.
His masculine scent filled her senses. She melted into him.
His tongue cautiously traced over the seam of her lips.
She accepted him.
Their tongues dueled.
A deep throaty groan escaped Noah. Strong arms encircled Angie's torso, pulling their bodies closer together. Her breasts ached with longing when they crushed to his well-muscled chest. She was lost in the sensation of Noah.
Both breathing raggedly when the kiss broke. They came up for air.
She couldn't say for certain how long their make out lasted, but long enough for the windows to steam over. Guilty like a teenager in a back seat, thrilled and excited, she agonized over how far to let the moment go.
Noah broke the tension by saying, "Definitely on the nice list."
Angie couldn't help noticing the large bulge in the front of his Levi's.
Noah smoothed his palms down his thighs, readjusting his hips.
A warm zing tingled in her core. A powerful rush came from the recognition of how she affected him the way he affected her.
His Adam's apple bob when he cleared his throat.
"Angie, I would love to play Santa some more with you, and I mean I would truly love to, but Lizzy is expecting us back at her house for a debriefing. She said she wanted full, color details since she wasn't able to come tonight."
Angie blushed with pleasure. Noah wanted her.
"I understand." She laughed quietly. "We can't have you getting grounded by your mom before Christmas. I'm counting on Santa to leave me something special under the tree this year."
Noah's return grin delightfully wicked, he winked. "You might have to sit on my knee later and whisper what you want from Santa."
Angie winked. "I might have to."
He started the truck and turned on the defroster.
Angie scooted back to her seat by the door and buckled up. With a single hand she wiped away the collected moisture from their heavy breathing.
Through the window, across the almost deserted parking lot she spied a white Ford Ranger idling. Was it her imagination, or did it have a dent on the driver's front fender. Buddy drove a white Ranger with a dent.
All the pleasant moods from moments before spiraled away, leaving a chill of anxiety behind. No damn way!
He didn't have any idea where she stayed. The stashed credit card remained unused in the pocket of her suitcase. She called her sister once to say where she was and that she was alright, but Lisa hated Buddy and would choke before she told him a thing.
Angie was being paranoid. At least, that's what she told herself.

Tonya:  Remember to visit Lani’s blog to sign up for a chance to win a copy under the blog The Sexiest Time of the Year. Also, leave us an email when you comment so that we have a way to get in contact with you. Thanks for stopping by today!