Just One of The Girls...with Sascha Illyvich

One of The Girls...
with Sascha Illyvich

I’m a male romance writer; I’ve come to terms with making no bones about that! But I had a realization about not only my writing career but about the friends in my life. As the old cliché goes, I tend to have more female friends (to my significant other’s chagrin!) than male ones. Most men irritate me honestly and even though I’m quite the man’s man (I can camp, cook, talk tech, money) I don’t do cars much. A very Loved One of mine is into fixing cars, like my brother. Now she and I are also into guns and swords and things like that, and if a bunch of us went out partying one night, she’d be “one of the guys.”

Now turn the tables. Let’s say I’ve been invited to go out with the girls and we have a good time. Everything’s above board, right? Conversation starts and I have a LOT to say, as I’m sure you can imagine.

Of course when it comes to guy things, I’m the “resident guy” obviously. But the thing is, I don’t hold your average man’s opinion. I’m a little more sympathetic in some cases, a lot less in others. And when in larger groups I tend to bond more with women.

The realization hit me that I might be “one of the girls.”

Not every woman in my life knows I cross dress. In fact there are a few who are downright frightened at how good I look in women’s lingerie! That aside though (My handler at DragonCON has pictures!) the thought kind of unnerved me.

Mostly because I’m a man, I suppose. I never really thought about it. My girlfriends tell me I’m not as disgusting or cruel as typical men. I’ll admit it; I’m actually a bit of a neat freak. I hate the fact that I have to let go of cleaning my studio once a week in favor of writing. It bugs me.

But I wear my facial hair neat. I shower daily. I don’t burp or fart in public for the entire world to hear. I like to think that dressing nice is for me as much as it is for anyone I’m with. I tend to give advice to other women about their male problems and my advice tends to usually make sense.

If that makes me “one of the girls” so be it, I suppose. Of course it also makes me privy to shit I don’t always want to know. I don’t think most women need me to explain that one…

I told my best friend of almost 18 years that I think I’m one of the girls and she said “Dear, did you just figure this out?” I’m not kidding! I have the text message on my phone to prove it!

I’ll admit, I am kind of obsessed over my hair. It’s just above my hips but I want it longer and thicker and to not have split ends. That’s not because I’m girly, it’s because I label myself a metalhead. And not one of those fru-fru 1980’s bullshit spandex pansies, either. (Fact is, my hair looks really good and I LIKE it long!)  In fact, I just trimmed it myself for the first time.  Thankfully the red is still in (I'm a natural platinum blonde) so I can see it better but I obsessed for two days, asking both my GF and my tobacconist if it looked okay!

I have a pension for female metal, my latest obsession is a band from Norway called Sirenia. Before that, it was Tristania (actually the same band) but they have death/black metal elements in their symphonic/gothic styles that I dig. I still intend to base a heroine off Angela Gascow from Arch Enemy. (Gotta love that death growl!) Before that, I was (and still am) obsessed with Cristina from Lacuna Coil. Her voice just makes me want to fuck…

See? That’s a male response! I like to think of myself as very secure in who I am. Even if I’m not sure that peach is my color…

So what say you, ladies? Any of your male friends involved in such a manner in your lives that you could classify them as “one of the girls?” How do they feel about it? 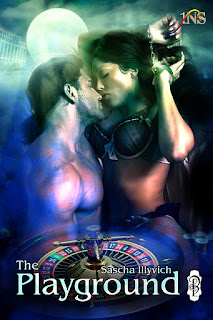 Tonya:  Sascha, thank you so much for being my guest this week. We've had a blast and love that you'e One of The Girls, Hon! Muah! Readers, don't forget to leave a comment and your addy to be in the contest and now...let's chat about our guy friends who can easily be 'one of the girls'!
Posted by Tonya Kinzer at 6:00 AM